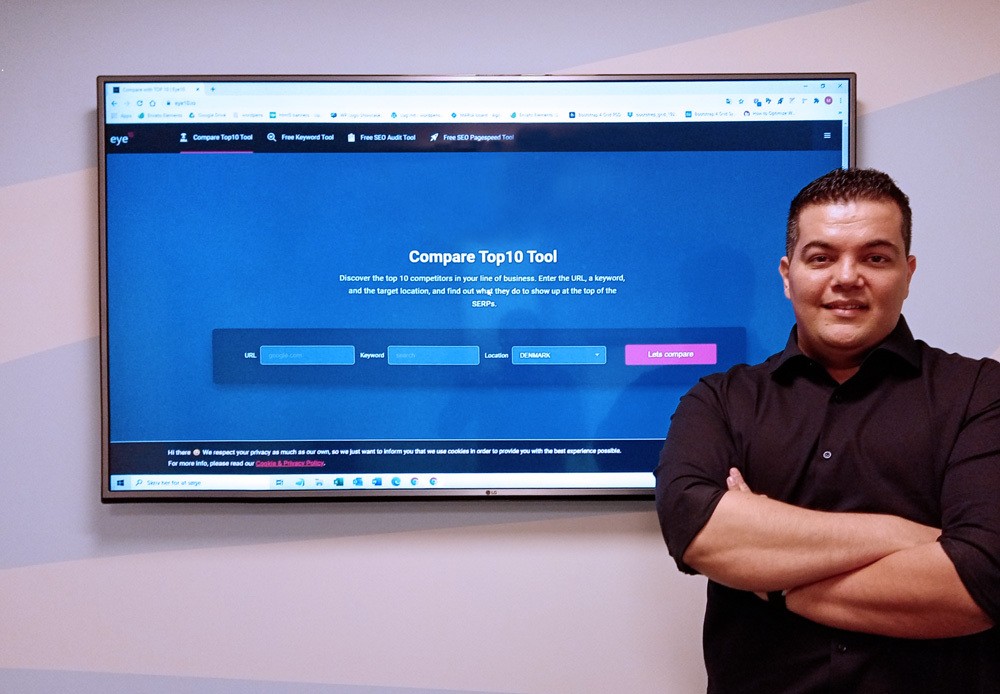 Morten Frølich December 8, 2020 news
Do you want to get your website to the top of Google search results?

The Compare Top10 Tool will help you get there!

Danish software company eye10 has developed a SEO tool that provides an overview of your website’s performance compared to those of your closest competitors.

eye10 has just launched a new SEO tool. What distinguishes this tool from other tools on the market is the opportunity to compare your website with your competitors:

“eye10 gives you the opportunity to compare your website’s SEO performance with your top 10 competitors. It lets you know what you need to optimize in order to become number 1 on Google rankings,” Mohammad Dadkhah, CEO of eye10, explains.

As a serial entrepreneur, Mohammad Dadkhah has developed Priceshape with former partners, and has been the sole entrepreneur behind the international SEO agency Search Royals and the content marketing agency Wordpens, amongst others. But the new project differs from the others in terms of scale and potential, and so far, customers all over the world have embraced the new tool:

”We did a beta-launch on Friday the 30th of October in 42 countries, and we got over 180 sign-ups during that weekend. As of today, we have gotten sign-ups from all the countries, so the next step will be to launch it all over the world,” Mohammad says.

Four tools in one

The tool is not just one tool though, but four. There is the tool that lets you compare your website with your top 10 competitors (Compare Top10 Tool), but there is also a keyword tool, a SEO audit tool and a SEO pagespeed tool.

Necessary for everyone with a webshop

The world of e-commerce has exploded in the last decade, and during the COVID-19 crises, this tendency has risen even more. This generates bigger opportunities for the ecommerce industry, but it also increases the competition:

“By using the eye10 tools, you get a collection of data that can give you the competitive edge, if used correctly. You get the opportunity to optimize your website according to Google’s algorithm changes, and according to the actions of your competitors. If you have a webshop, or if you want to attract as many customers or users as possible to your website, then this is something you have to keep an eye on all the time,” Mohammad elaborates.

Even though the first version has just been launched, Mohammad Dadkhah and the team behind eye10 are already developing a version 2.0:

”We are working on a version 2 which will have more functions than the first version. This is necessary because both the market and the expectations from our users keep growing and evolving,” Mohammad Dadkhah concludes.

eye10 is a Danish software company based in Copenhagen, Denmark.

When was eye10 founded?

eye10 the company was founded in the summer of 2020, and their website and SEO-tools were launched the 30th of october 2020.

eye10 is the brainchild of Mohammad Dadkhah, a serial entrepreneur from Copenhagen, Denmark.

Why was eye10 founded?

eye10 was founded and developed with the purpose of providing users with clear and unfiltered digital competitor insights.

Do you want to get your website to the top of Google search results?

The Compare Top10 Tool will help you get there!